Put on a Prison Bus 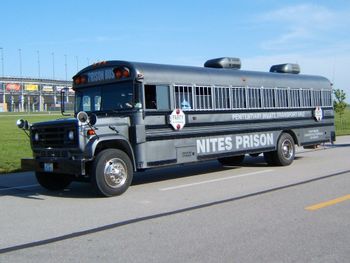 "The wheels on the bus go round and round!
We're all prison bound!"
Having a character get arrested is often a convenient way to have them exit the story. This is especially common for villainous characters, in which case their arrest will be treated as their final defeat in the story. This is a good way to get rid of the villain if the creator doesn't want them to die, but still get punished for their crimes. Sometimes you may see a lesser villain being arrested, while the main villain ends up dying, especially if it's a case of Vile Villain, Laughable Lackey.
Advertisement:

Sometimes, this may be followed by a quick scene of the villain in jail. This makes for a good The Stinger scene. However, we will usually see nothing more than that. The character's trial and other events leading up to their imprisonment will almost never be shown due to Law of Conservation of Detail.

This trope works on the Offscreen Inertia principle: if a character is last seen in legal custody, the audience assumes they remain in custody (though presumably moved to an actual prison at some point) until shown otherwise.

May overlap with Cardboard Prison if the character gets arrested at the end of one episode or entry, and breaks out of prison at the beginning of the next, especially if it keeps happening. May also overlap with Big Damn Heroes if the police show up just in time to arrest the villain.

This trope is frequent in crime shows, mysteries, and superhero comics. Not so much in superhero movies, though. See Superhero Movie Villains Die for that.

Sister Trope to Sealed Evil in a Can, when a villain is defeated by being magically sealed away. Contrast Karma Houdini, along with Killed Off for Real, Disney Villain Death, and other Death Tropes.

Not to Be Confused with Role-Ending Misdemeanor, in which a Real Life arrest leads to an actor or other creator disappearing from the public eye. Related to Put on a Bus to Hell.

No Real Life Examples, Please! People get arrested all the time, but although they may disappear from the public eye during their sentence, they will still be known by other prisoners, prison staff, or other people around them. Even if someone died during their own arrest, other people would still have to deal with their body, records, etc. One does not simply disappear from the story of real life, not even by arrest.

This is an ending trope, so beware spoilers!