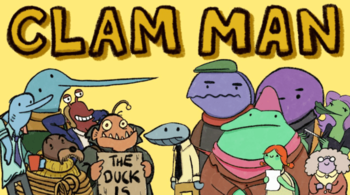 A Tale of Ducks, Jobs, and Mayonnaise.From left to right Pete, Martin, Criminal, Mr. Bosman, Bill, Clam Man, Sheamus, Ted, Natalya, Tilda, Wendy, and Sheryl.
"Clam Man is the story of the Clam Man. Intriguing, isn't it? Yes, it's true - he is a clam and yet also a man. This is not a topic of debate, it is fact. We've confirmed it while working on this game. Using science."
— Excerpt from the first game's Steam store page description
Advertisement:

Clam Man is a video game series by Team Clam, taking place in an underwater city inhabited by anthropomorphic sea creatures. The first game, Clam Man, was released on Steam on May 23, 2019. Clam Man 2: Open Mic, published by Team Clam but developed by marafrass, was released for free on June 19, 2020. This game is described as a "prologue" to an upcoming sequel, Clam Man 2: Headliner.

The games center around Clam Man, the recently promoted Junior Sales Executive at the Snacky Bay Prime Mayonnaise company in the city of Snacky Bay. In the first game, things take an unexpected turn for the worse when Clam Man's coworker, Lindsey, is mysteriously fired, and Clam Man himself is fired shortly afterwards. Clam Man begins to suspect that his former boss is involved in a conspiracy, and takes it upon himself to investigate.

The game focuses more on storytelling and humor than on gameplay or tricky puzzles. However, there are a few puzzles in the first game. Notably, one puzzle late in the game lets players choose the difficulty, with the easy difficulty being recommended for players who are mostly playing for the story.

Open Mic switches from a 2D point-and-click adventure to an RPG with some point-and-click adventure elements. This game takes place four years after the first. Pete is now the CEO of the mayonnaise company, and Clam Man has gotten his job back. The game begins when Clam Man and Pete discover that the office building has a secret floor, which houses a comedy club that three comedians have been building in secret. The club is to open that night, but the comedians need advertising. Clam Man realizes he is interested in doing stand-up comedy, so he sets off on a quest to come up with three good jokes and get the word out about the comedy club.

This game has a Characters page in progress. Please move character tropes there.

Tropes relating to the series overall:

Tropes in the first game: