Video Game / Call of the Sea 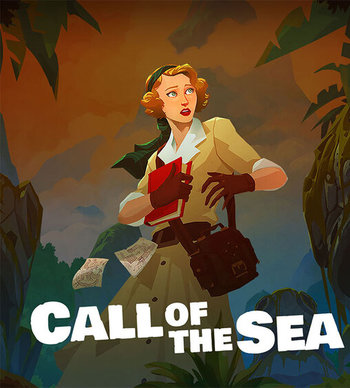 A mystery/puzzle game developed by Spanish studio Out of the Blue and published by Raw Fury that takes cues from the works of Lovecraft.
Advertisement:

The year is 1934, and Norah Everhart is about to go on a journey. Her husband, Harry, had organized an expedition to a mysterious region of the South Pacific in hopes of finding a cure for her inherited family illness — an affliction that has left her with chronic weakness, lesions on her hands, and, if her family history is anything to go on, a shortened lifespan. Now, after months of keeping Norah up to date, Harry has gone missing. But perhaps he still lives, as Norah receives a message to come find him on a nameless island.

So Norah sets out on an adventure to rescue her missing significant other. But there is more than just a case of someone missing going on. The island has many secrets waiting for Norah, and she may just discover things about herself along the way...