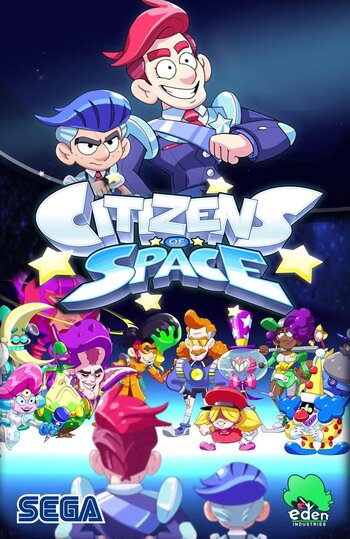 Citizens of Space is a quirky, turn-based RPG just like its predecessor Citizens of Earth, developed by Eden Industries and published by Sega. Once again you are thrust into the shoes of a red-haired, self-absorbed politician trying to do good despite what their, uh, limited worldview would otherwise indicate. In this case you play as the ambassador of Earth, which had finally gotten accepted into the Galactic Confederation. During his speech, the ambassador learns that the planet he represents has gone missing, and figures the best solution would be to just go out and find it so he can do his job properly.
Advertisement:

There are plenty of changes to the battle system compared to the previous game. Encounters are now truly random rather than showing up on the world map. Rather than all citizens being party members, you have three classes of citizens: Fighters, Partners, and Summons. Fighters will be put in the party to trade blows, partners are somewhat like equipment but they will not only alter the stats of the fighter they're equipped to but also add their own moveset to that fighter's pool, and summons which can be used much like items. Summons, items, escaping, and a new feature that enforces battle conditions for both friend and foe cost charisma, the ambassador's own energy bar that fills up from fighting and winning battles. The ambassador in this game can step in during allied phase and do his charisma costing actions without using up the citizen's turn. For all the changes the actual battles are still mostly the same as before: each citizen has their own skills and energy, some attacks give energy or use energy, and their skills are based mostly on their job.

A Compilation Rerelease titled Citizens Unite: Earth x Space was released on January 28, 2021, published by Kemco instead of Sega. It features new content that ties both games together.