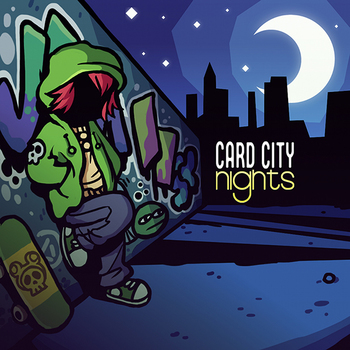 Card City Nights is a single-player game published by Ludosity in 2014.
Advertisement:

The protagonist is a youth introduced to a Collectible Card Game by a clever marketing ploy: A free starter set delivered to their house and a tournament with a huge prize.

It's now up to the player to defeat opponents for money and booster packs, trying to get one of each of the eight Legendary-type cards and win the tournament.

Oh, and the cards? All characters from Ludosity and Daniel Remar's past games, including:

The game received a "Valentine" update

in Feb 2016, adding cards from Princess Remedy In a World of Hurt as well as new difficulty modes.

A sequel Card City Nights 2 was released in September of 2017 for Steam and mobile devices, bringing both changes and new mechanics to the game and setting. For one, The City is now IN SPACE (because 'it's always night in space"), namely as the Starship Frivolity, everything has gained a bit of a sci-fi edge, the two game boards have been merged into a single board, meaning both you and your opponent can run interference on the fly. Oh, and now you can play against other folks online (which has precluded CCN2 from releasing on any other PC storefront, due to Steam's online framework being required for said multiplayer).

It sources its cards and characters from the same games as the first game, as well as the Ludosity games of Ittle Dew 2, PsyCard, Princess Remedy In A Heap Of Trouble, Quest Forge By Order Of Kings, Spacenoid and Slap City, and the Daniel Remar games of Gunnel Vision, and Strawberry Jam.