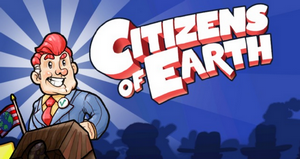 A true politician would never get his own hands dirty, after all!
Advertisement:

Citizens of Earth is a Role-Playing Game made by Eden Industries. The company cites EarthBound as an inspiration, most seen in the game's modern-day setting.

In Citizens of Earth, you play as the vice president of the world, tasked to save the earth by gathering a team of your friends, family, and local townsfolk. Like any good politician, you don't actually do the work yourself; fighting is handled by recruiting citizens, from your brother and mother to bodybuilders to conspiracy theorists.

The gameplay is similar to that found in early role-playing games. One of the clear inspirations is the game’s instant win. This mechanic automatically resolves battles against low-level enemies to save players the monotony of grinding through pointless low-level enemies when they're at a considerably higher level.

The game came out on January 20, 2015. Though its Kickstarter had failed

, the game was picked up

A sequel, Citizens of Space, launched on June 18, 2019 for Steam, PS4, and Nintendo Switch, with Atlus' parent company Sega picking up publishing rights. A Compilation Rerelease titled Citizens Unite: Earth x Space was released on January 28, 2021, this time being published by Kemco and featuring new content that ties both games together.

Citizens of Earth provides examples of: