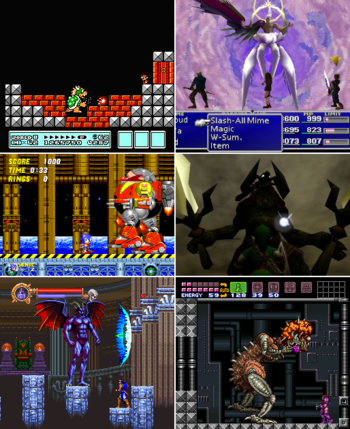 They're big, they're bad, and they're ready to throw down. Are you? note Clockwise from top-left: Bowser, Sephiroth, Ganon, Mother Brain, Dracula, Robotnik.
"I am End Boss, the greatest of all the Sammer Guys. It is my duty as End Boss to laugh at your feeble party and proclaim your doom. Shall we begin, challenger? HAH! YOU ARE PATHETIC! PREPARE TO BE CRUSHED AS THE UNIVERSE WITHERS!"
— End Boss, Super Paper Mario note Actually, he's a superboss, but a parody of final bosses who can only be fought once Mario and co. have defeated the actual final boss.
Advertisement:

To make this reading experience feel as climactic as possible, listen to either this,

A Sub-Trope of Boss Battle, the Final Boss is the last major challenge in many video games. They will usually be much harder to defeat than all of the enemies the player has faced thus far (as always, there are exceptions), and will be prone to making a suitably grand entrance for their stature. These may also be known as "the Boss of the Game".

Usually resides within The Very Definitely Final Dungeon, and with rare exception is the Big Bad or Greater-Scope Villain of the game's general storyline (in games with a Non-Action Big Bad, the final boss tends to be The Dragon) — in the cases where this is averted, you may find yourself facing a final challenge against someone for the sake of the challenge rather than because they Must Be Stopped. When they're evil, they usually have multiple forms that must all be defeated back-to-back or even taking forever to complete the game. If the game uses the same boss music throughout the game (a lot more common in earlier games), expect this boss to get its own theme. It is sometimes a Load-Bearing Boss, so even after defeating it, there will be one final challenge to escape its Collapsing Lair (or part of the ending cutscene will depict the heroes escaping the lair, if you don't get to play that part yourself).

See Giant Space Flea from Nowhere when the Final Boss seems to have nothing to do with the events leading up to it. If they show up earlier in the game just to beat up the heroes, it's a Final Boss Preview. If the Final Boss is considered the last "normal" enemy, but you did so well that another boss appears out of nowhere, the replacement is called the True Final Boss instead. May make future appearances if Promoted to Playable.

Being a near-ubiquitous trope in video games, a list of specific examples is unnecessary - almost every game with Boss Battles has one that takes place just before the ending of the game, and that's the Final Boss. Note that the Final Boss isn't necessarily the hardest; even if it's not a pushover, there may be a really hard boss earlier on, and Super Bosses are usually around to give Challenge Gamers a tougher fight than is needed to finish the game. More interesting forms of this trope are under different pages. Also, the final boss need not be the very last thing you fight. Even the first game with a final boss had normal enemies spawn after the fact. Sometimes, a post-climax finisher fight occurs; less difficult, or smaller stakes than before, meant to tie up loose ends; we like to call that a Post-Final Boss. Or, as mentioned above, a True Final Boss shows up.

We may also use this to refer to the final enemy faced by the protagonist(s) in other pieces of fiction.