Video Game / The Church in the Darkness 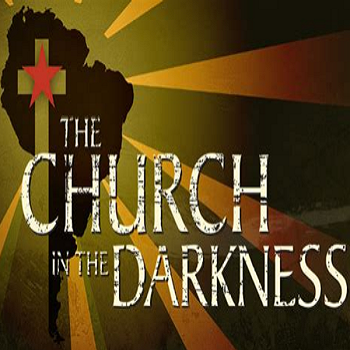 The Church In The Darkness is a 3D Stealth-Based Game with Roguelike elements. It was developed by Paranoid Productions (which is mainly Richard Rouse III, the creator of Odyssey: The Legend of Nemesis and Damage Incorporated in the 90s, and later on the lead designer of The Suffering games) and published by Fellow Traveller.

It is about a very thin Expy of Jim Jones' cult (called Collective Justice Mission here, and led by Isaac and Rebecca Walker) in its late stage, when it has already established their "Freedom Town" in South America. One of rank-and-file members, Alex, is a nephew of former lawman Vic, who becomes justifiably worried, and decides he needs to personally infiltrate the cult to check on Alex and get him out of there. Notably, the storyline doesn't stay fixed, but evolves from both directions. It is both altered by your choices regarding how you approach the infiltration, and changes on its own from playthrough to playthrough.

The game was released on August 2nd, 2019 for PC through Steam, as well as Playstation 4, Xbox One and Nintendo Switch. The official website is here

, and there are also gameplay

Also, Isaac and Rebecca Walker, the couple leading the cult, are voiced by John Patrick Lowrie and Ellen McLain, who are better known as the Sniper of Team Fortress 2 and GLaDOS, respectively.