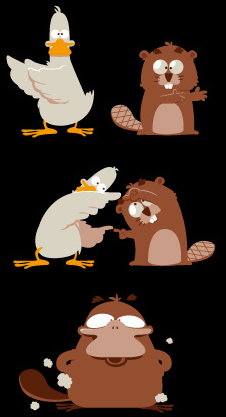 And that's how the platypus came to be!note Image by Pandaluna
"What Amethyst is attempting to say is Opal is an amalgam of our combined magical and physical attributes fused into a single entity."
— Pearl, Steven Universe, "Giant Woman"
Advertisement:

Two separate characters merge to make one, usually more powerful, unified being. This is done either via Applied Phlebotinum, Functional Magic and/or Merging Machine. This can have a number of unpredictable results:

In most cases, this is to make a being more powerful than either would be alone (especially when it involves The Hero and The Rival since that invokes Yin-Yang Bomb), but there are some exceptions.

Contrast Literal Split Personality and Self-Duplication, when an individual gets split into two or more beings, Split-Personality Merge, and Physical Attribute Swap, where two characters exchange physical traits instead of mixing them. Contrast also Grand Theft Me, which looks like the Power Booster or Switcher variant but with less cooperation and more hostility. Compare Combining Mecha. Not to be confused with Composite Character. See also All Your Powers Combined, Motif Merger, and Equippable Ally (for a less intrusive method of combining two characters). This trope may sound like a literal version of Mating Dance, but it's not. When the fusion goes horribly wrong, see Merging Mistake. If the components cannot easily be discerned in the result, see Fusion Dissonance. If the components have a romantic relationship, also see Romantic Fusion. If the fusion is done between siblings, it's a Sibling Fusion.

Omnimon is one of the first canon appearances of DNA Digivolution, the fusion between the mega-level Virus-Busters WarGreymon and MetalGarurumon.

Omnimon is one of the first canon appearances of DNA Digivolution, the fusion between the mega-level Virus-Busters WarGreymon and MetalGarurumon.