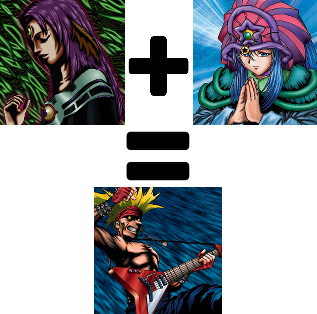 Lady of Black Magic + White Mage = Billy Idolnote Top-left: Witch of the Black Forest; Top-right: Lady of Faith; Bottom: Musician King
Rata: Fusionist. How come it had lower stats than one of its materials?
Shape: ...What?
Rata: And then... Musician King. Lady of Faith... Witch of the Black Forest... Dave Sabo?
Shape: Oh, Fusion monsters. Listen, it was the middle ages. Nobody cares.
— Rank10YGO
Advertisement:

Combinations from a Fusion Dance tend to retain specific traits of the mergers. The Composite and Mixed Form Shapeshifter varieties tend to retain traits from all of the merging components, while the Power Booster and Switcher usually take the appearance of one component then retain the abilities of the others. Those of Two Beings, One Body are more varied and either treatment works for different cases.

However, there are instances of resulting fusions that are too different from their components. It could be that their fusion takes them apart on the atomic level and puts them back together in a way that it might as well be an entirely new body, or it involves some Shapeshifting but Morphic Resonance is just unnecessary for the process. Whatever the case may be, none of the fused components are recognizable in the result just by mere observation.

When the fusion's anomaly is unintentional, it's a Merging Mistake. It can overlap with Fusion Dissonance if the mistake deforms the result enough for the components to be unrecognizable. Compare with Random Species Offspring, for mismatching results from a different kind of combination.