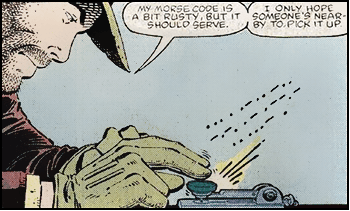 SELD CAEQ IVE? Or is that CAWA?
"Friday afternoon, I'm walking home from school and I'm watching some men build a new house.
And the guy hammering on the roof calls me a paranoid little weirdo. In Morse code."
— Emo Phillips
Advertisement:

The usual communication devices are unsuitable, unavailable, broken or under surveillance. What can a smart hero do?

Morse code, of course! Make a noise, flash a light, or grab something convenient and start maniacally flipping it on and off.

Naturally, the message's recipient knows Morse code, too, but any villains in the vicinity will fail to penetrate this cleverness. Not only that, but sometimes the recipient will figure out the missing bits they lost while figuring it was actually Morse.

If the viewer happens to know Morse Code, it would be noticed that almost always the actor is just tapping randomly. If the recipient is rattling off the message almost as fast as one can read, it's fake Morse code. The fastest straight-key operators can send at 35 words per minute, and decode in their head at up to 40 words per minute. It's unlikely that someone with just basic training in Morse code can even send at more than 14 words per minute with a straight key.

In another example of research failure or maybe Acceptable Breaks from Reality, movies and TV usually show the Morse operators visibly tapping the key. Even a basic Morse class teaches you to grasp the sides of the key button with thumb and middle finger and index finger on top, and work the key from your wrist. But that's much less visual.

A few extra points of pedantry: First, there are actually two versions of Morse used for the Roman alphabet—American Morse, which was the original code developed by Samuel Morse, and International Morse, which was created for German railroads in the 1860s and later spread worldwide. International Morse is what most early wireless operators used, given radio's global reach. It was also the version required by the FCC for amateur licenses until 2007. American Morse, AKA Railroad Code, actually has multiple mark and space lengths, making it more efficient at the expense of complexity and susceptibility to noise. International Morse, meanwhile, has just the dot and dash most people are familiar with. If a Western or Civil War movie shows telegraphers using American Morse, you can tell the writers really did the research.

Secondly, all versions of Morse require both a rising and falling edge to the signal in order to differentiate dots from dashes. Wire telegraphs used a sounder, which produced a staccato click on both the rising and falling edge, while the CW modulation used in modern wireless telegraphy produces a pure sine wave tone for as long as the key is held down. So, you can't produce copiable Morse by just banging random objects together.

Incidentally, Morse Code is officially obsolete for radio communications: In 1999, it was retired as the international standard, and in 2007, the FCC dropped requirements for Morse proficiency for amateur radio operators. It hasn't gone away completely, however. Morse is still in semi-official use by most navies with signal lamps (unlike radio signals, they don't give away a ship's position and can't be picked up by the enemy, unless they're in visual range), and by amateurs: Propogation beacons

used to gauge atmospheric conditions and estimate their current effective transmission range identify themselves by a two-letter callsign in Morse, for example, and it's traditional (and in some places was once required) for a repeater

to send its station callsign in Morse at regular intervals. A surprising number of particularly dedicated old-school hams are still using it to talk to each other, as well.

By the way, if you're in trouble, you can always send the most commonly-known message in Morse Code: 3 dots, 3 dashes, 3 dots (S.O.S.). Though SOS works differently from most Morse transmissions: there should be no spaces between letters, and it should be repeated in a continuous SOSOSO pattern.

A similarly recognizable one is SMS (3 dots, 2 dashes, 3 dots), which is used as a ringtone on many Nokia mobile phones to indicate an incoming text.

Fridge Logic may set in if the people using Morse code don't live in societies where they have radio communications or aren't from Earth.