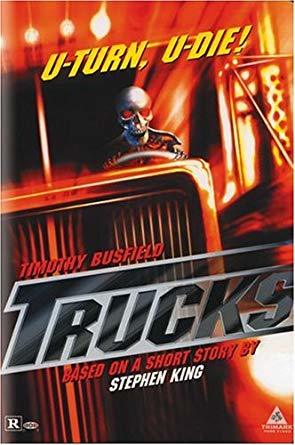 One day, in a small town in Nevada, trucks become sentient beings wishing to kill or enslave all the squishy meatbags. Somehow, the trucks are able to control every part of themselves, and rampage around a small truckstop. After killing several members of the cast, the trucks make it obvious what they want. To be fed by the gas station owner.

"Trucks" is a Stephen King short story from the anthology Night Shift that was later adapted into a made-for-tv movie by the same name. The story had previously been made into a much more loosely adapted movie, ironically directed by King himself, called Maximum Overdrive.

This story/movie contains examples of: