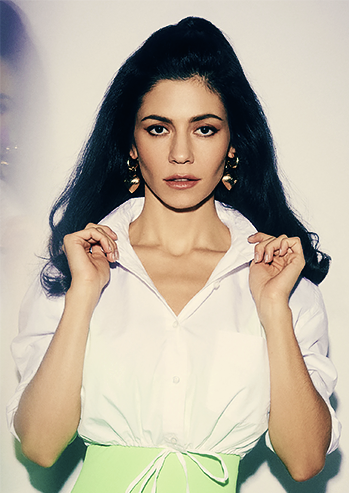 Influences:
"I don't think it's constructive for an artist to feel like they need to have an element of pain or self-destruction to make good work. I definitely think moments of hardship or turmoil can inspire great things. But I also don't want to be unhappy."
Advertisement:

Marina Lambrini Diamandis (born 10 October, 1985), also known by her former stage name Marina & the Diamonds (yes, it's just one person) as well as MARINA, is a Welsh singer-songwriter. Signed to 679 Recordings, she released her debut album, The Family Jewels in Febuary 2010, and has followed this with several more — see below. Her musical style ranges from keyboard-based ballads to more up-tempo New Wave-style songs with full band backing.

Her former stage name, "Marina & the Diamonds", consists of Marina's first name and the translation of her surname which means "Diamonds" in Greek. Although "The Diamonds" was often mistakenly believed to refer to her backing band, it in fact referred to Marina's fans: she explained this on her MySpace page by saying "I'm Marina. You are the diamonds." Prior to the release of her 2019 double album Love + Fear, however, she changed her stage name in all her social media to MARINA.

Alternative Title(s): Marina And The Diamonds