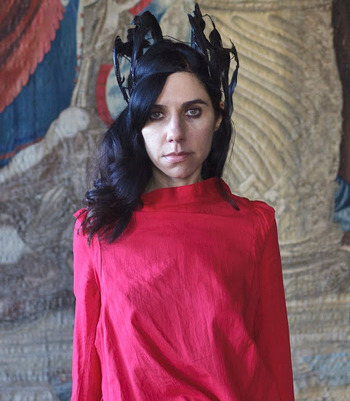 Harvey formed her first band, named "PJ Harvey", as a teenager with drummer Rob Ellis and bassist Ian Olliver, who soon left and was replaced by Steve Vaughan. Drawing on influences from alt-rock bands like The Pixies and Television, the contemporary Grunge movement, blues-rock and Captain Beefheart, the trio independently released their first album Dry in 1992. Dry quickly brought them critical acclaim and attention within the Alternative Rock scene, with Rolling Stone magazine naming her the year's Best Songwriter and Kurt Cobain naming Dry as one of his favourite albums.

Harvey, Ellis and Vaughan signed to Island Records and commenced work on their follow-up album with the help of Record Producer Steve Albini, hired specifically because he produced The Pixies' Surfer Rosa, an album and band Harvey is a huge fan of. The resulting album, Rid of Me, enjoyed critical acclaim for its harsh, grungy sound and its intense songwriting. Ellis and Vaughan left the band after its release and Harvey continued as a solo artist. Her solo career has largely been defined by experimentation, alternating between blues-influenced guitar-heavy angry Punk Rock, catchy pop-rock and subdued, experimental material, all tied together by her darkly humorous lyrics and theatrical performances. She herself has declared that when I'm working on a new record, the most important thing is to not repeat myself.

Among the accolades she has received have been the 2001 and 2011 Mercury Music Prizes (the only Artist to win twice), seven BRIT Award nominations, five Grammy Award nominations and a further two Mercury Music Prize nominations. She was also given an MBE in the 2013 Queen's Birthday Honours list for "services to music". Rolling Stone named her 1992's Best New Artist and Best Singer Songwriter and 1995's Artist of the Year, and placed two of her albums (Rid of Me, To Bring You My Love) on its 500 Greatest Albums of All Time. She was also rated the number one female rock artist by Q magazine in a 2002 reader poll. Harvey has said that she enjoys performing more than writing and recording because performing is when the music "makes more sense".

Throughout her career, Harvey has collaborated with several other musicians, most of them from the Alternative Rock scene, such as: Nick Cave (contributing vocals to two songs on Murder Ballads), Tricky (a song on Angels With Dirty Faces), the band Sparklehorse (lending guitar, bass and backing vocals to two songs from It's a Wonderful Life), Marianne Faithfull (she produced, wrote and performed on five songs from Before the Poison), Mark Lanegan and Thom Yorke (who sang lead vocals on "This Mess We're In" and provided backing vocals for two other songs from Stories from the City, Stories from the Sea). She has also created two albums in collaboration with John Parish, Dance Hall at Louse Point and A Woman a Man Walked By.