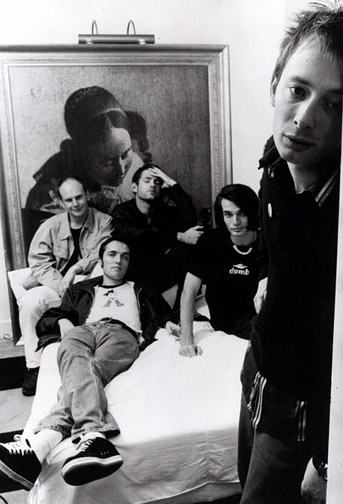 I'm a reasonable man, get off my case. note  On bed, clockwise from top: Ed, Jonny, Colin, and Philip. At doorway: Thom.
Influences:Influenced:
Advertisement:
"High up above, aliens hover,
making home movies for the folks back home
of all these weird creatures who lock up their spirits,
drill holes in themselves, and live for their secrets."
— "Subterranean Homesick Alien"

Radiohead is an Alternative Rock group from England, often regarded among the most consistently acclaimed and influential bands in the world since the 1990s.

They formed in 1985 under the name On a Friday, this being the only day of the week they were allowed to rehearse at school. Originally an Elvis Costello-influenced new wave band, and then a standard alt-rock band in the early '90s, the style of their early albums (Pablo Honey, The Bends) soon gave way to more ambitious sounds that incorporated echoey, operatic rock (OK Computer) and experimental electronica (Kid A, Amnesiac) before eventually finding something of a happy medium (Hail to the Thief and beyond). Long story short, every album is a New Sound Album.

The band is known for their anti-establishment lyrics and, since Kid A, rejecting many of the standard promotion forms of the industry. Most notably, the band opted to promote Kid A (which was highly anticipated after the success of OK Computer) with a series of one-minute-long videos featuring snippets of each song from the album. Furthermore, the group opted to allow fans to name their own price for the right to download their album In Rainbows online off of their website.

The members have also put out solo work. Singer/principal songwriter/frontman Thom Yorke has released three albums and additionally did scoring work for Suspiria (2018). Guitarist Jonny Greenwood, the only classically trained musician of the group, has found considerable independent success as a film composer, most notably serving as the associated composer of Paul Thomas Anderson from There Will Be Blood onward. Drummer Philip Selway began pursuing a career as a singer-songwriter in 2010, with two albums already under his belt, whilst guitarist Ed O'Brien released his solo debut in 2020.

The members are additionally affiliated with separate bands. Thom was part of a group called Atoms for Peace that was active between 2009 and 2013 (reuniting briefly in 2018), working alongside people such as Red Hot Chili Peppers bassist Flea and frequent Radiohead producer Nigel Godrich. He also formed another group called The Smile with Jonny and jazz drummer Tom Skinner in 2021.

Their artwork is also quite weird. The website of the man responsible for most of that artwork, Stanley Donwood, is just as odd.

) have Twitter accounts, with varying degrees of updates. In addition, Thom

Radiohead were inducted into the Rock & Roll Hall of Fame in 2019.

Non-members who have had a major impact on Radiohead's sound and image:

You can now vote for your favourite Radiohead album by heading over to the Best Album crowner.

You can also vote for your Radiohead track through the Best Song crowner!

This is what you get when you trope with us: