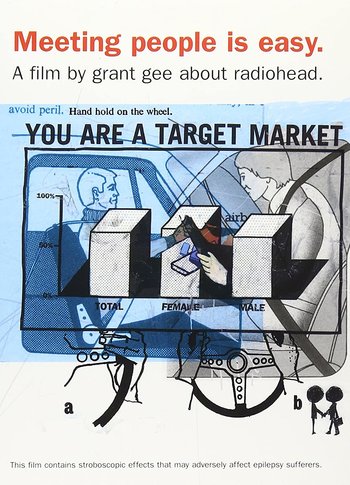 "I am not here and this is not really happening."
Advertisement:

Meeting People Is Easy is a 1998 direct-to-video rockumentary following the band Radiohead during the world tour for their third album OK Computer. It was directed and filmed by Grant Gee, who also directed the band's "No Surprises" video (the behind-the-scenes of which is briefly shown in the film).

The quality that separates Meeting People Is Easy from most documentaries is that while it follows a cohesive timeline, it doesn't even bother with a plot. Instead of highlighting the interpersonal relations or private matters of the band, the general atmosphere of the tour is the subject, focusing on the ennui the band grows towards their stardom and their eventual burnout, namely Thom Yorke's gradual mental breakdown leading to the later creation of Kid A and Amnesiac.

In achieving this goal, Gee used a direction style akin to the creation of a collage, with most footage falling into five main categories:

The film also contains an early performance of a song then called "Big Ideas (Don't Get Any)", which a decade later would be released in a different arrangement as "Nude" on the band's 2007 album In Rainbows, as well as an early performance of "Man of War" (the lyrics to which are also printed on the back cover of both the VHS and DVD releases), which wouldn't see an official studio release until the OKNOTOK expanded reissue of OK Computer in 2017. Conversely, a scene set to the B-Side "Palo Alto" was later released on its own as a promotional music video for the film.

On a more trivial note, Meeting People is Easy was the first product released on the DVD format by EMI, with the US DVD being put out by EMI subsidiary Capitol Records in 1999 and the UK DVD by Parlophone Records in 2000 (Capitol and Parlophone were Radiohead's record labels in the US and UK, respectively).

Tropes exhibited by this film include: