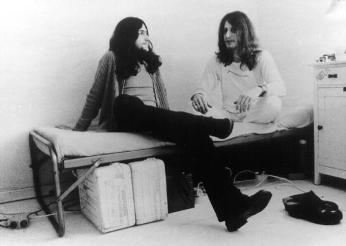 Michael Rother and Klaus Dinger
"This beat was the war drum of modernity, pushing the listener forwards into the future. It is often associated with the great transport networks of Germany, the railway lines and the autobahns. In fact the rhythm even mimics that of a car speeding along the open road or a train clattering along the rails: fast, measured, travel never ending. It was the rock beat stripped back to a glittering chassis. It was the minimalist framework on which improvisation could take place."
—The Quietus on the "motorik beat"

Neu! (yes, with an exclamation mark) was a German band formed in 1971 by Klaus Dinger (mainly drums, also guitar and other instruments) and Michael Rother (guitar, bass, keyboards, other instruments) after they left Kraftwerk. They are one of the major bands of what was dubbed by UK music journalists and critics as Krautrock.

Klaus Dinger and Michael Rother, after helping Kraftwerk complete their debut album (produced by Conny Plank) and being part of the line-up in a short period in which Ralf Hutter had left the group, decided to leave the group (partly because of Florian Schneider's difficult temperament).

With help from Conny Plank, they recorded their ground breaking debut album, which opened with "Hallogallo". This track is crucial because it defined, right there and then, Neu!'s important trademark sound, which was based on Dinger's "motorik beat" (sometimes also called the "Apache beat"). The rest of the album was, for the most part, incredibly different and experimental, although they seemed already defined (even by visual standards. Their logo was basically their name painted with a red marker over a white cover in a pop-art style).

Their second album was even more amazing. After recording some songs (including "Für Immer," which Julian Cope, in his book Krautrocksampler, called "Hallogallo, part two"), they found themselves short of money. Considering that they had released a single in between albums, they added the single (titled "Super", with "Neuschnee" as a B-Side) to the recorded tracks, but it still fell short of the desired recorded time. So, what did they do? Basically they took "Super" and "Neuschnee" and played them at different RPM (Rotations per Minute) and other methods like putting the record off-center at the turntable, hence anticipating the remix.

Their temperaments clashed and Dinger and Rother separated, and then reunited a couple of years later for their third and final album in the '70s, Neu!'75, which was a two headed beast. On side one, there were Rother's ambient explorations, very focused on keyboards and his guitar playing, which was very fluid and devoid of stuff like chordal progression and blues scales note  in fact, right from the beginnings of the group, like some of the best Krautrock groups, they didn't want to emulate English or American music in any way, shape or form . On side two, Dinger basically set the template for UK Punk music, at least two years (or three, if you count the A-side of single "Super") before the first singles by the Sex Pistols and The Damned, with relentless single chord guitar pounding, distorted "motorik" beats bashed simultaneously by his brother Thomas and Hans Lampe, and Dinger's sneering, unintelligible vocals. They split and went separate ways (Klaus, Thomas and Hans went to form La Düsseldorf, who took that second side of the record Up to Eleven, and Rother went to form Harmonia with Cluster and beginning his solo career).

They reformed in the mid '80s to record another album, which ended up sounding like a cross between their old sound and the contemporary sound of some New Wave Music groups. The album was released in a more commercial format in 1995, and only became part of the official back catalogue as of 2010.

Among the people influenced by them, there were: David Bowie, Iggy Pop, Brian Eno, Orchestral Manoeuvres in the Dark, John Lydon (of the Sex Pistols and Public Image Ltd.), Joy Division, Gary Numan, Ultravox, Boredoms, Stereolab (who are the most blatant case of Follow the Leader, by basically exploiting the Neu! sound), Radiohead, and also many auteurs in the latest electronic music scenes. Additionally, Negativland named themselves and their label Seeland after two of their songs.