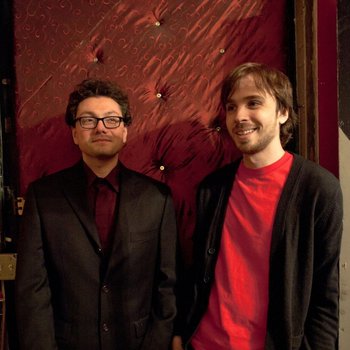 Red Vox is an Alternative Rock band hailing from Staten Island, New York City. Formed by Vinny and "Jabroni" Mike of Vinesauce fame, they are joined by producer Joe Pecora and a number of other guest musicians. The band was formed from the vestiges of Davy's Grey, a previous band of Vinny's that had a limited period of activity before splitting up not too long after its formation. By comparison, Red Vox has stuck around for a considerably longer amount of time, and since 2016 have put out five studio albums and a Frank Zappa-esque comedy rock EP.

While much discussion of the band is heavily overshadowed by Vinny's fame as a Twitch streamer, that's not to say that there's nothing remarkable about the music itself. The band's Signature Style encompasses a mix of different alternative rock styles and influences, from Nirvana-inspired grunge to melancholic electronic rock in the vein of Radiohead and Gorillaz, all glued together by a neo-Psychedelic Rock core based heavily on the styles of Pink Floyd, Tame Impala, XTC, and The Beatles. Additional influences stretch to inspiration from the art rock of David Bowie and Iggy Pop to the Post-Punk of bands like Talking Heads and Devo.

As the band is still relatively "indie" in terms of exposure and exist in an era where rock music itself is no longer the dominant force of popular music, their activity is fairly subdued. Red Vox have done occasional minor live performances at conventions and release studio recordings more or less at the band's own volition. The band themselves corroborate this with a desire to avoid becoming too famous, Vinny already being aware of the effects of certain levels of popularity from being a member of Vinesauce; the band's publicity is fueled entirely on their own and maintained at a low presence compared to other independent rock bands, to the point where all their music is self-released (which also allows them greater creative control than if they were signed onto a record label). Overall, they're a band content with staying low-key, emphasizing their own satisfaction towards the quality of their music over anything else.

. They also have a Twitch channel

where they premiere new music and hold live Q&A sessions.