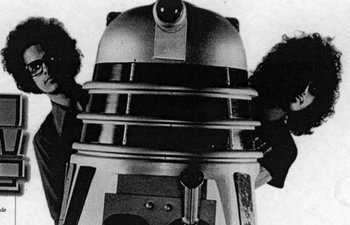 The Mars Volta is a Genre-Busting Progressive Rock band from El Paso, Texas (at some points also based in Mexico) formed in 2001. As of July 2019, they have released six studio albums, an EP, a live album, and a handful of other releases including an unofficial B-sides and outtakes collection leaked to the Internet from an unknown source in August 2013, and are currently in the studio recording a new album.

While critically divisive in some quarters (Pitchfork infamously gave a scathing 2.0/10 review to their second album Frances the Mute, by far the lowest rating it received from any major music publication), their work, particularly their first three albums, has attracted particular acclaim from the progressive rock community, and in 2008 earned the title of Best Prog-Rock Band from Rolling Stone.

They initially entered a hiatus in late 2012, which they formally announced as a break-up on January 25, 2013. However, the band members continued to work with one another and, after a time, confirmed that they would ultimately reunite the project. Rodríguez-López and Parks went on to form a new project, Bosnian Rainbows.

In addition, Rodríguez-López, Bixler-Zavala, and Hinojos' previous band, At the Drive-In, has reunited; they released a new single in 2016 and a new album in 2017. As of April 2014, Rodriguez-López and Bixler-Zavala had also formed a new project entitled Antemasque

Despite this, the band remained inactive for quite some time; Rodríguez-López indicated

in 2016 that he intended for a reunion to happen, but it seemed to be mainly a matter of scheduling as to when (he wished for founding members Eva Gardner and Jon Theodore to be involved). Bixler-Zavala also indicated on Twitter in February 2018 that a reunion will occur

, though he later clarified

that it wouldn't be immediate. In May 2019, he confirmed

that the band were in the studio.

In June 2022, they released their first new track since Noctourniquet, the three-minute "Blacklight Shine

", and announced a tour and a new self-titled album

"Sulking drained the fall of my pale will swarming by your steps
Licking the ankles of blasphemer guilts
It only meant to drape a plastic over the stuck pig scalp of head
To cover the sock where the flatline had spread
The kiosk in my temporal lobe is shaped like Rosalyn Carter
She says my map is home again but torn face down
I have only but a million blemishes to tell you all about"
And with every body that I find
and with every Claymore that they mine
I won’t forget who I’m looking for
OH MOTHER HELP ME I’M LOOKING FOR!