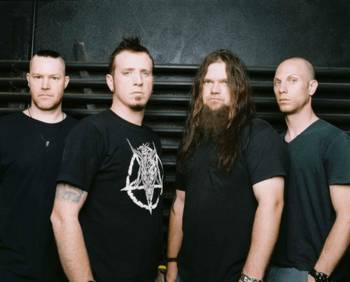 Mudvayne is an American Progressive Metal band from Peoria, Illinois, known for complex, polymetered song structures, loud, savage, bass-heavy riffing, unusual compositions and precise musicianship. They formed in 1996, and cite film director Stanley Kubrick as the only influence on their music.note However, they've expressed admiration for a lot of other bands in interviews, including Porcupine Tree, tool, Pantera, King Crimson, Genesis, Emerson, Lake & Palmer, Death, Metallica, Carcass, Deicide, Emperor, Miles Davis, Black Sabbath and Rush, despite saying they aren't influenced by other bands.

The band originally started playing music that had more of a Hard Rock sound, with very little of the Jazz, experimental or Progressive Rock elements that they would incorporate later. This early sound was displayed on Kill, I Oughtta, an EP of early studio recordings and some live tracks that was later subject to Fanon Discontinuity. Ryan Martinie joined the band when original bassist Shawn Barclay quit during the EP's recording. Martinie had been a member of a Dream Theater-style band called Broken Altar, and subsequently Mudvayne's style would shift to a mixture of Progressive Rock and Thrash Metal, which drummer Matt McDonough described as "Math Metal" to an interviewer.note McDonough later rejected the "math metal" label, saying that it was a joke he cracked in an interview that was taken seriously and that he doesn't think that Mudvayne was a pioneer of anything.

On LD 50, the band performed in Horror movie-inspired face paint and masks and called themselves Kud, Gurrg, RyKnow, and sPaG. The album involved themes inspired by human evolution and 2001: A Space Odyssey, with samples taken from a recording of Terence McKenna discussing his theory that evolution was triggered by psychedelic mushrooms. The End Of All Things To Come had the band wearing alien masks and performing under the names Chüd, Güüg, Rü-D, and Spüg. It also had a nearly all-black cover, which led the band to describe it as their "black album". Since Lost and Found, however, they've performed without stage names or disguises.

Self Titled Album was printed entirely in blacklight-reactive ink, which makes the inserts appear to be blank. Which would make this Mudvayne's white album.

In 2010, Mudvayne went on a hiatus for 11 years while the members were working on various side projects, with Chad Gray being involved with Hellyeah, Greg Tribbett and Matthew McDonough working with the Progressive Hard Rock supergroup Audiotopsy, and Martinie currently playing in another Progressive Rock supergroup, Soften the Glare, a jazz fusion act, this time with guitarist Bon Lozaga, formerly of Pierre Moerlen's Gong. Eventually, they would announce that they would be reuniting in 2021 to perform in several festivals in autumn of 2021.

A more detailed biography of the band can be found here

, courtesy of the Progressive Rock Database.