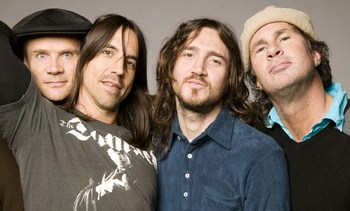 The Red Hot Chili Peppers are an Alternative Rock/Funk Rock band formed in 1983 in Los Angeles, California. One of the more prominent bands in the funk scene of the time, they exploded in popularity during the following decades and are considered by some to be a leading force in alt-rock's widespread popularity.

With over 80 million sold records, six Grammy Awards, and the most #1 singles, cumulative #1 weeks, and top 10 songs on the Billboard rock charts, they are one of the most successful rock bands of all time. They were inducted into the Rock and Roll Hall of Fame in 2012note notably meaning that Josh Klinghoffer, the band's guitarist at the time, is the youngest inductee ever, being inducted at just 32.

While the band roster has shifted numerously during their active years, the most well-known (and current) lineup consists of vocalist Anthony Kiedis, guitarist John Frusciante, bassist Michael "Flea" Balzary, and drummer Chad Smith.

Their original style during The '80s and The '90s revolved around an energetic funk sound and hedonistic Sex, Drugs and Rock & Roll subject matter, but they began to experiment more as their popularity grew. Come the Turn of the Millennium, they would become world-famous for more melodic song structures and introspective lyrics.

Considering that between them they've probably done enough illicit substances to kill a herd of buffalo, it's remarkable that they're all still alive (excluding the band's original guitarist Hillel Slovak, of course). To give you an idea of how much they've done, John Frusciante overdosed on heroin. Twice. And lived.

This band is the Trope Namer to Catholic School Girls Rule, which is an infamous song from their second album Freaky Styley.

The band currently consists of (founding members in bold):