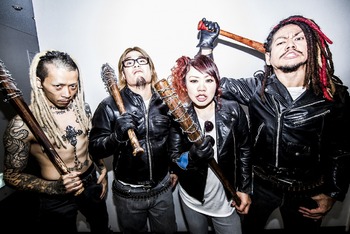 They are not a "comedy" band, but many of their songs, like "Bikini Sports Ponchin", "Chuu Chuu Lovely Muni Muni Mura Mura Purin Purin Boron Nururu Rero Rero" and "(Cutter Knife Dosu Kiri) Honjou Hasami" have pretty damn funny lyrics when contrasted with the upbeat tunes of the songs.

The band are probably best known for their songs "What's Up, People?!" and "Zetsubou Billy", which are the second opening and closing themes of the Death Note anime, and are generally harder-edged and less hilariously perverted than most of their material ("A kindergartener is fine, too."). It's worth noting that they're also pretty successful in their home country, their latest album being in the top 20 best selling albums of 2013 in Japan. Not bad for a metal band.

Daisuke-han and Nao are founding members, but when Sugi and Key left the band in 1999, Ryo-kun and Ue-chan joined them in the same year.

Faith No More, Incubus, System of a Down, Andrew W.K. and the early work of Red Hot Chili Peppers are comparable. A more modern example to compare to is Issues who also also experiment with anything and everything they can find.

Their music contains examples of