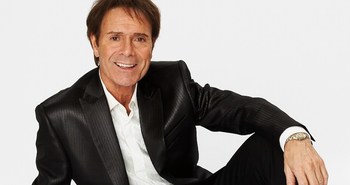 Congratulations
And celebrations
When I tell everyone that you're in love with me
Oh Cliff / Sometimes it must be difficult not to feel as if / You really are a cliff / when fascists keep trying to push you over it! / Are they the lemmings / Or are you, Cliff? / Or are you Cliff?
- Rick, The Young Ones
Advertisement:

Sir Cliff Richard (real name Harry Rodger Webb, born 14 October 1940 in Lucknow, India) is a singer and entertainer who has managed the feat of a British number one hit single in every decade from the 1950s to 1990s. One of the most enduring icons of British showbusiness, Cliff began his career billed as England's answer to Elvis Presley, and indeed was a cutting edge figure in the Rock & Roll era who made some genuinely good memorable music in that idiom. His hit "Move It" is regarded as the first significant British Rock & Roll song. He fronted a band called the Shadows, who after he went solo, re-invented themselves with some success as an instrumental guitar group. Outshone in the 1960s by The Beatles and other beat groups, his career never went belly-up, and he reinvented himself with some success as a TV presenter and celebrity. Music never went away, and he remains popular as a middle-of-the-road singer, although possibly as un-known outside Britain as Johnny Hallyday is outside France.

Cliff has in fact had moderate success in the USA, but unfortunately not enough to establish him as a household name there. In his career he has had eight US Top 40 singles, including the million-selling Devil Woman, and We Don't Talk Anymore, the latter becoming the first to reach the Hot 100's top 40 in the 1980s by a singer who had been in the Billboard top 40 in the 1950s, 1960s, and 1970s.

In Europe, Sir Cliff Richard has represented the UK at the Eurovision Song Contest twice. In 1968, he finished second with Congratulations - missing out to Spain's Massiel and her song La La La La. (There is a suspicion that the politicking for which Eurovision is notorious ensured he missed out on the top slot here: Spanish dictator General Francisco Franco, in the middle of a row over Gibaltrar, is said to have personally intervened to ensure Spain's vote did not go to the UK). In 1973, Cliff came third with Power To All Our Friends.

Outside music, Cliff is probably best known for his intense evangelical Christian faith, and the fact that for a rock singer, he leads a squeaky-clean life involving self-imposed celibacy. This, and the palpable absence of a Lady Richard, has led some to question his sexuality, although this is unfair: celibacy is rare, but is a genuine vocation and lifestyle choice which does not imply gayness. (By definition, in fact, to be celibate precludes any form of active sexual expresssion, hetero or homo.)

As a tax exile from Britain, it has been remarked that as a Christian he knows how to give unto God what is God's, but perhaps requires assistance with giving unto Caesar that which is Caesar's.

His commitment to Christianity is both ridiculed and grudgingly admired - he really does appear to live as he preaches (except perhaps in the matter of shelling out tax) - and he has a legion of devoted fans, who, as with Barry Manilow (a singer in the same ilk) tend to be middle-aged and female.