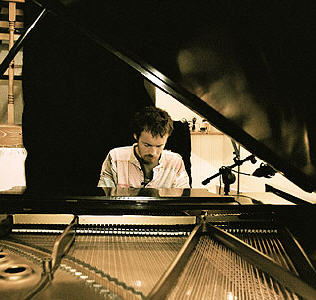 But I'm not a miracle
And you're not a saint
Just another soldier
On a road to nowhere
Advertisement:

Damien Rice (born 7 December 1973) is an Irish singer-songwriter and musician. His songs are generally quiet, acoustic, and intense.

He began his musical career as a member of the 1990s rock group Juniper, releasing two singles with the band; after he left, the band regrouped and renamed themselves to Bell X1.

After collaborating with several artists throughout Ireland and England, he released his debut O in 2002. It peaked at #8 on the UK albums chart and produced three top 30 singles in the UK, "Cannonball", "The Blower's Daughter" and "Volcano".

Many of his songs have been fodder for soundtracks, usually during sad or angsty moments.

His work provides examples of