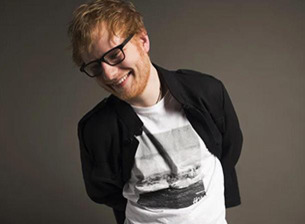 "I'm quite arty. I didn't know whether to become an artist or musician but I realised I could paint with music. All my songs have colours."
Influences: Joni Mitchell, Bob Dylan, Van Morrison, Eric Clapton, Elton John, The Beatles, Nizlopi, Eminem, Taylor Swift
Advertisement:

His first big break was when he released the No. 5 Collaborations Project EP in January 2011, which saw both the attention of Elton John and Jamie Foxx. After signing to Asylum Records, he released his debut album, + (read "plus"), that same year in the fall. The album conjured his Breakthrough Hit and arguably his Signature Song, "The A Team", which became a sleeper hit success. However, not mentioning another successful single, "Lego House", would be a disservice.

After forming a strong friendship with Taylor Swift (appearing on one of her Red songs and appearing as an opening act on her Red Tour), writing songs for One Direction, winning two Brit Awards, and playing three sold-out shows in Madison Square Garden, he released his second album, x (read "multiply"), in summer 2014. It became Spotify's most-streamed album of the year (over 430 million streams), the highest-selling album of the year in the UK, and won the Brit Award for British Album of the Year and was also up for two Grammy Awards.

It should be noted that his songs tend to be a bit depressing, especially if you read into the real meaning of the lyrics. Sheeran also has a special hatred for ticket touts and in March 2017 cancelled fifty thousand tickets for his tour bought up by touts and resold them to fans at face value.