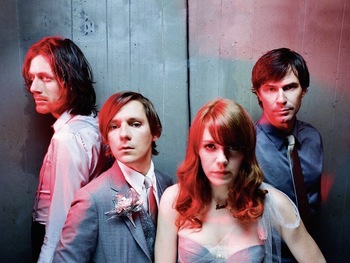 Starting off as a lo-fi, country-influenced indie band, they later transitioned to a poppier, Soul-influenced direction, following Lewis' voice as it dragged her into her thirties. Additionally, Sennett's role as a singer was drastically reduced (although he sings lead in his side project, The Elected). The band broke up in 2011, with Lewis going on to a successful solo career.

They released five albums in total:

Tropes Applying To This Band: