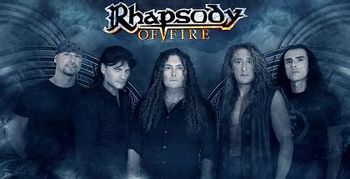 Rhapsody of Fire is a Symphonic Power Metal band that originated in Italy in 1993, spending about a week of this period as 'Thundercross' and most of its history as just 'Rhapsody'. Co-founded and led by Luca Turilli (lead guitar) and Alex Staropoli (Keyboard), others included Fabio Lione (vocals), Alex Holzwarth (drums) and Patrice Guers (bass). One of the things that makes them notable among Symphonic Metal bands is that all of their earlier songs tell of events, people, places and things in a highly detailed Epic Fantasy, The Lord of the Rings-esque setting.
Advertisement:

They have since released nine albums, with two EPs, Rain of a Thousand Flames and The Cold Embrace of Fear – A Dark Romantic Symphony, commonly referred to as the fourth and ninth albums in the series, respectively. The band has stated that From Chaos to Eternity (2011) marks the end of the Algalord Chronicles, 14 years after Legendary Tales was released in 1997.

Rhapsody (of Fire)'s albums are: