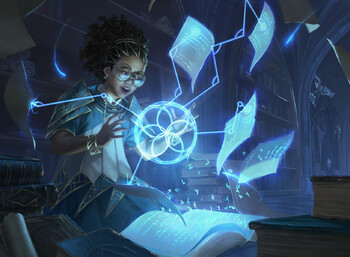 Your math textbooks were right: math is magic!
"Using the power of Mathemagic, you can multiply power, subtract hope, and cube-root the dreams of man himself."
— Mathemagic Skill-tree Description, Dungeons of Dredmor
Advertisement:

Modern science loves explaining complex physical phenomena through comparatively simple-looking mathematical abstractions. Motion of an object? F = ma. Energy content of a mass? E = mc2. State of a gas? pV = nRT. Exceptions to these rules are themselves often explainable through math — more intimidating calculations, of course, but still math. These equations are only useful, however, because they accurately describe physical interactions in nature; without this connection, they're just meaningless jumbles of symbols.

Authors often neglect to establish this link between math and reality, instead treating equations as if they possess a power all on their own.note There are power functions, though! And some theorems are said to be more powerful than others. As of today, real life mathematicians still struggle on how to harvest math's magical potential. This often manifests in two ways:

Such "magical math" (or "mathemagic" or "Mathamancy") doesn't have to be connected to any aspect of reality, so it will often be rather nonsensical as a result. In this way, such math is somewhat related to the Numerological Motif, in which numbers get intrinsic properties.

On the flip side, writers will occasionally make systems of magic describable through math, much like their physical science counterparts. This use of math is more readily justified, though usually still not explained in sufficient detail to make mathematical sense.

This may be Functional Magic under rule magic. Arguably Truth in Television if you consider science to be a form of magic, and that its formulas are being applied to create technology, thus hacking the universe and having magic-like powers over things.

Compare Calculus Is Arcane Knowledge, in which math is not exactly magic.

Using a fire glyph, an ice glyph and sleeping nettles to create a fog that drugs anyone who breathes it.

Using a fire glyph, an ice glyph and sleeping nettles to create a fog that drugs anyone who breathes it.