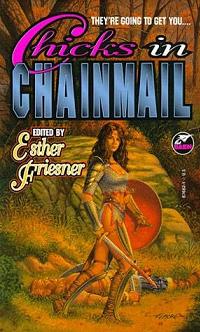 Chicks in Chainmail is a fantasy anthology series created and edited by Esther Friesner, and published by Baen Books, that centers around women warriors, usually with humorous tales and with a Chainmail Bikini-clad woman on the cover that gets skimpier with each volume. So far, the following books have been published in the series: