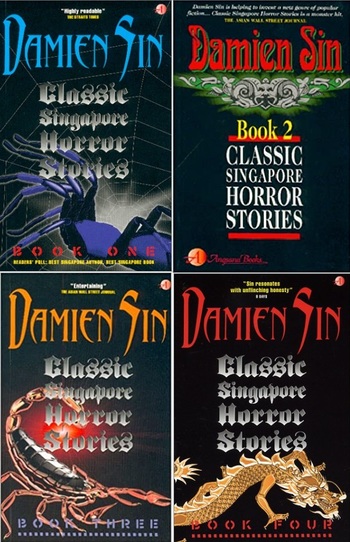 No vampires, no werewolves, no zombies, no serial killers... well, maybe scratch the last one off the list.

Take Scary Stories to Tell in the Dark, set it exclusively in Singapore, put it through a set of realism filter, with a dose of twisted humor, a blend of macabre imagination, some excessive blood and gore, some adult themes, and... voila! Welcome to the macabre mind of Damien Sin, into the deep, dark Singaporean underworld.

Classic Singapore Horror Stories is a 4-issue anthology of Urban horror from the late Damien Sin (1965–2011), an ex-poet, musician and writer. His most popular work so far, and the defining example of early-90s Singaporean literature, the entire anthology shows the side of Singaporean myth, culture, and traditions people never saw, conveyed through the author's trademark telling strokes and bizarre, kinky humor. Described as verbal bullets at Singapore icons, more often than not Damien Sin's stories features no supernatural elements or black magic (despite the stories being firmly rooted in the horror genre) but instead reveals the true horror as from the dark side of humanity.

The first book was published in 1992, with each subsequent installment released between regular intervals; the fourth and last were published in 2003. Damien Sin cites lack of ideas and personal issues as reasons for the delays of a possible fifth book, but still reveals that he does have interest to continue writing the long-gestating fifth installment. Unfortunately, his death pretty much ensures the series would stop at its fourth.

There was an attempt to adapt one of the stories, ''One Last Cold Kiss'', into a movie,

but as of 2014, the project is currently stalled in Development Hell.