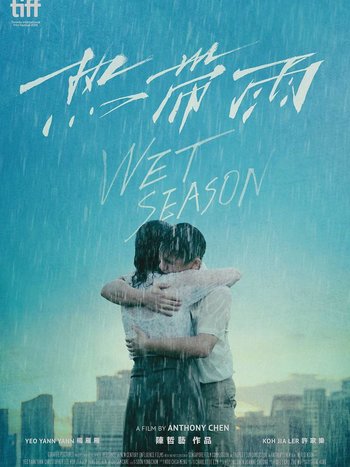 Wet Season is a 2019 Singaporean film directed by Antony Chen, the first one since his 2013 debut title Ilo Ilo. The story follows Ling (Yeo Yann Yann), a Malaysian-born Chinese language teacher at a boys' secondary school. Treated with ridicule at her workplace and struggling with an invasive IVF treatment, with which she's trying to save her marriage with her local husband Anthony (Christopher Lee — no, not that one), she finds solace in looking after her elderly father-in-law (Yang Shi Bin).

With the dreaded O-Levels approaching, Ling begins teaching remedial classes to her struggling students. Among them is Kok Wei Lun (Koh Jia Ler), a wushu athlete whose parents are perpetually away on business trips. She starts to bond with him as she drives him home through the wet season, unaware of his slowly growing feelings for her…