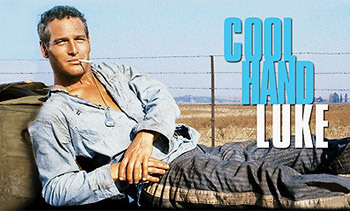 "Sometimes nothing can be a real cool hand."
Advertisement:

It is the story of one Lucas "Luke" Jackson (Newman) during his stay at a Florida prison camp sometime in the late Forties or early Fifties, and how he stands up to the system within the camp.

George Kennedy won the Academy Award for Best Supporting Actor for his performance as Dragline, one of Luke's fellow prisoners.

Lalo Schifrin's score is well known for its "Tar Sequence" piece, which would go on to be used as theme music for news programs on various ABC owned stations. Australia's Nine Network news program, Nine News Australia, still uses it to this day.