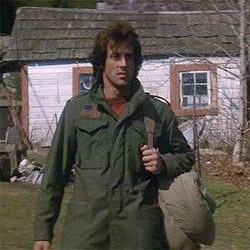 A Stock Character of many B-grade action movies, video games, and even a few dramas. A character returns home from the military. May be related to Stranger in a Familiar Land if they have trouble adjusting to normal life again. They may find that peace is No Place for a Warrior.

The staple of this trope is that the returning soldier will inevitably be called upon to put his career skills to good use. He might find his hometown overrun with crime bosses, monsters, ghosts, or whatnot depending on the genre of the story. But he will always be the one to save the day, as he's the only one who has the training.

Darker stories may find him putting those skills to bad use, especially by turning to a life of crime, see From Camouflage to Criminal for more on that.

Compare Shell-Shocked Veteran. Contrast Pre-War Civilian Career for what someone did before joining the military.

Army SSG Jim Scott returns home at the end of World War I.

Army SSG Jim Scott returns home at the end of World War I.