Literature / I Know What You Did Last Summer 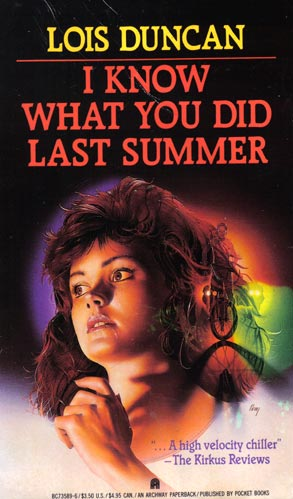 "Last Summer" did not involve hook-handed fishermen, by the way.
If you're looking for the 1997 slasher movie loosely based on this book, see I Know What You Did Last Summer.
Advertisement:

Here is the original 1973 novel from Lois Duncan. The plot is incredibly different from the slasher film, with the characters' names and the Accidental Murder being the only similarities.

Julie James is a high school senior who has just finished up for the summer. Everything seems to be going well for her. She's got excellent grades in her finals and she's been accepted to Smith. Then one day she receives a note in the mail.

"I know what you did last summer."

What Julie did last summer - along with her friends Barry, Helen and Ray - was accidentally hit a little boy on a bike one night. They pitched an anonymous phone call to the paramedics and left, never turning back. And now it seems someone has found out.

The novel is largely different from the film that was adapted later on. Rather than a slasher story, this is more of a mystery drama, dealing with the characters' guilt over the incident.