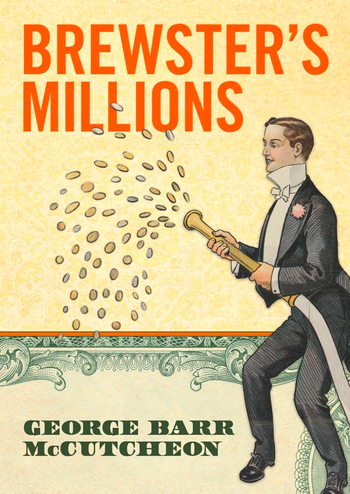 Brewster's Millions is a novel written by George Barr McCutcheon in 1902, although it's arguably more well known for various adaptations that have been made since. The basic story revolves around Monty Brewster, an impoverished young man who inherits a substantial amount of money from a long-lost relative and also stands to further inherit a huge additional amount. (The total sum varies by time period; to fit the title, it's always in the millions or more. In the original novel, Brewster has to spend one million to inherit seven millions, while in the 1985 movie it's to blow 30 million to get 300 million.) But the inheritance has a catch: Monty must waste the entire first amount in a limited period of time. He must end the challenge with no tangible assets whatsoever, with severe limits on possible outs like charity or purchasing items...and keep the arrangement a secret from everyone else. Monty wins the full inheritance if he pulls it off, but if he breaks any of the rules or fails to spend the first amount in full, he gets nothing.
Advertisement:

As Monty starts hemorraging money as fast as he can, he soon realizes a horrible truth: it's amazingly difficult to lose an incredible amount of money.note Well, under the conditions outlined of the will, anyway.

In the novel, there are two benefactors: Edwin P. Brewster, who leaves our hero the original small fortune with no strings attached, and James T. Sedgwick, who challenges our hero to earn the big fortune by getting rid of the smaller one. Adaptations generally change it so that there's only one benefactor and the smaller fortune is only available on condition that the protagonist use it to try and win the big one.

The novel has been adapted for the screen nine times: the most famous film version remains the 1985 film starring Richard Pryor; the story had been adapted before in 1921, 1926 (with the protagonist changed to a woman), 1935, 1945, and 1961; a Hindi version produced in 1988 is a Shot-for-Shot Remake of the 1985 film; a Tamil version was produced in 1997; a play based on the story was created in 1906; and the novel's plot also formed the basis of an episode of Punky Brewster.

Other adaptations add examples of: