Film / I Am a Fugitive from a Chain Gang 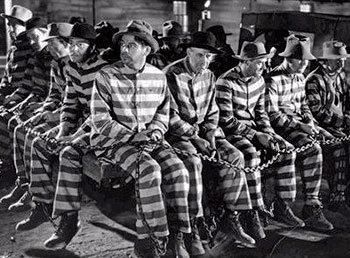 Hailed as one of the most influential films of the 20th century, I Am a Fugitive from a Chain Gang is a 1932 crime drama film released by Warner Bros., directed by Mervyn LeRoy and starring Paul Muni.

Muni plays Sergeant James Allen, who upon his return home from World War I knows he is now a changed man, and leaves home to go work in construction. Jobs are hard to find, however, and as he travels the country looking for work Allen soon finds himself falling into poverty. Along the way, he manages to befriend the wrong man at the wrong time, and soon after getting a bite to eat becomes an unwilling participant in a robbery: He is forced at gunpoint to help steal $5 note equivalent to about $85 today from the diner, and when the man holding the gun on him is shot by police, he panics and tries to flee, barely making it through the door before getting captured. He is sentenced to serve ten years of hard labor on the chain gang at a Deep South prison camp.

After enduring enough of the back-breaking work and the sadistic treatment of the camp guards, Allen escapes with the help of two other inmates, and travels to Chicago. He gradually works his way up to become a success in the construction business under the name Allen James, but when femme fatale Marie Woods discovers he is an escapee, she blackmails him into marriage for his money. However, it's clear that they are not in love in the slightest; after discovering that she is unfaithful, Allen cheats on her with the beautiful and kind Helen. When Allen asks Marie for a divorce, she is so outraged she tells the authorities that Allen James is James Allen, and he is caught once more. But when the press hears of the brutality he endured on the chain gang, and the successful and respected member of the community he's become since his escape, public pressure leads to the governor of Illinois refusing to extradite him.

The (unnamed) Southern state that convicted Allen offers him a deal: if he turns himself in and serves a token term of 90 days—which, he's promised, will consist of light clerical work—he'll be given a full pardon. Wanting to clear his name, Allen agrees. Upon his return, however, he learns the "deal" was just a ruse to get him back behind bars, and he's not only put right back to work on the chain gang but told he must serve out the remaining nine years of his sentence. Bitterly disillusioned, Allen manages to escape once more. Some time later Helen encounters him on a darkened street, where he tells her that he can never see her again and will be on the run for the rest of his life, before disappearing back into the shadows. (Director LeRoy claimed that this final scene was an idea that came to him after a light bulb blew out on the set, plunging it into darkness, but in fact that was always part of the script.)

One of the most famous of the many "problem pictures" Warner produced in the '30s to highlight (and exploit) social and political issues, I Am a Fugitive from a Chain Gang was based on the true story of Robert Elliott Burns, and with the help of this movie Burns—who was still on the run at the time this was made—was freed in 1945, and lived free until his death ten years later. (Burns would later be the subject of a 1987 made-for-TV biopic called The Man Who Broke 1,000 Chains, in which he's played by Val Kilmer).