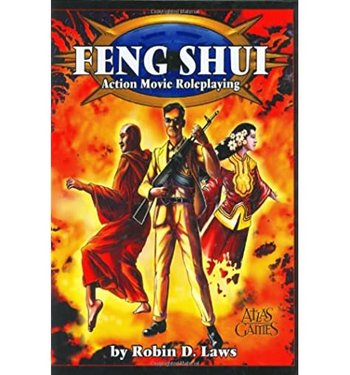 Feng Shui is a classic cinematic action Tabletop Game created by Robin D. Laws, based on his Collectible Card Game Shadowfist, that sets out to emulate Hong Kong action movies. There were two versions of the first edition, one by Daedalus Entertainment in 1996, the second by Atlas Games in 1999, which kept the original text, added some extra archetypes from a supplement, and gave it new art and layout. A full second edition, Feng Shui 2, came out in 2015, overhauling the mechanics and setting, and had a Kickstarter

. The Kickstarter included Blowing Up The Movies, a collection of essays on action movies and how to incorporate them into roleplaying games (focused on Feng Shui, but with a lot of advice being applicable to other games as well)

The game enlists characters in a Secret War all across time fighting bad guys who are trying to get their hands on sites that generate powerful chi, which are known as Feng Shui sites. If someone controls enough of these sites, he can literally change the course of history.

Time Travel is possible via a weird mystical realm called the "Inner Kingdom" or the Netherworld, home to all kinds of weird people and beings from a thousand shattered timelines. By traversing its loamy grey tunnels, one can access different portals to different points in time known as junctures. Our present day is one of those junctures.

The main junctures in the original versions are:

69 AD: A juncture straight out of Hong Kong wuxia movies, the Hong Kong of this juncture is nominally ruled by the Han Dynasty, but officials have become corrupt, and a secret faction of evil eunuch sorcerers known as the Eaters of the Lotus have taken over the administration of the empire, quashing dissent with kung fu warriors, summoned demons and powerful sorcery.

1850 AD: A juncture straight out of period kung fu cinema, where the Chinese and the Western powers clash in Hong Kong. It's also the period for Victorian adventures and Wild West action. One of the groups seeking power is the Guiding Hand, a group of Shaolin monks and other kung fu types who want to get rid of foreign influence in China and bring about a world of enlightenment, but who are very authoritarian, Sinocentric and Knight Templar-ish in their attitude and despise modern and Western technology and thinking in general.

Contemporary: The modern day, such as it is in the Heroic Bloodshed genre. This juncture (as well as most of 1850) is controlled by the Ascended, an Ancient Conspiracy made up of the descendants of animals who defied the natural order and transformed themselves into humans long ago. The only thing that can turn them back into their natural animal form is magic, and thus, the Ascended and their human agents, the Pledged, are actively involved in the suppression of magic and the discrediting or destruction of sorcerers. The Ascended control the government, the police, the military, and most of the major crime syndicates of the world.

2056 AD: A grim, dark Dystopian future, this juncture is ruled by a one-world government called the Bureau of Tactical Management (or "Buro" in short), monitoring its civilians by a sophisticated surveillance state that is equal parts the World State from Brave New World and Oceania from 1984. The group that was instrumental in bringing the Buro to power are the Architects of the Flesh, a group of mad scientists who use arcanowave technology, an unholy fusion of magic and science that warps its users beyond recognition, and who capture monsters from 69 AD and alter them to create cyber-demonic commandos called Abominations, which the Buro uses to fight its wars.

In addition to the factions listed above, three more factions exist:

The Jammers are a group of Bomb-Throwing Anarchists who are among the few people born with immunity to the influence of chi. They started as rebels against the Buro and the Architects in 2056, and have developed their own brand of junkyard tech that doesn't rely on arcanowave science. Among their number are a good number of intelligent cybernetic apes, the results of the Architects' first experiments. The Jammers want nothing less than to destroy every Feng Shui site in existence so that humanity can be freed from the "tyranny" of chi, something which could have some very bad consequences for the world at large if they succeed.

The Four Monarchs are four siblings and powerful sorcerers who once ruled the world up until the 20th century, when the Ascended captured enough Feng Shui sites in the medieval era to trigger a Critical Shift in time that brought about the world we know and removed them from power. Each monarch has carved out his or her own little kingdom in the Netherworld, and they continually plot and scheme against each other and against the other factions.

The Dragons are the good guys, a collection of maverick cops, redeemed assassins, martial artists, ninjas, big bruisers and other heroic types rising from among the humble and the outcasts of the world in order to fight for freedom, justice, and the right to look extremely cool. The Dragons rise again and again throughout time in order to help people and keep important Feng Shui sites from falling into the wrong hands, but like the heroes of many a Hong Kong action movie, the fate of anyone who takes on the mantle of the Dragons is often a tragic one.

In Feng Shui 2, the detonation of a Chi Bomb triggers a major shake-up in the junctures. The main junctures now are:

690 AD: The closure of their original era thanks to the bomb forced the Eaters of the Lotus to find refuge in this new juncture, during the time of the Tang Dynasty, where Empress Wu Zeitan, China's only official female ruler, has begun her reign. Unfortunately for the Lotus, the Empress is not about to tolerate any threats to her power, and has purged her court of sorcerers, so the Lotus seek to undermine her and claim power for themselves. They're also trying to retrieve their boss, who was left behind in the 69 juncture.

1850 AD: Uniquely among the main junctures, this one remains attached to its original year, with the Guiding Hand still seeking to remove foreign influence from China.

Contemporary: The contemporary juncture advances with the passing of time, so it's always the present day, and the Ascended continue to maintain their dominion over the world.

2074 AD: Thanks to the Chi Bomb, this juncture has gone from a totalitarian dystopia to a post-apocalyptic wasteland along the lines of Mad Max, with cyborgs, mutants and road warriors struggling to survive in a devastated world. In 2069, the Jammers detonated the bomb in an attempt to eradicate chi in all major junctures. Fortunately for the timestream - if not for those who survived - the worst effects were chiefly limited to their time period, killing 97% of the population, mutating many of the survivors, and laying waste to the environment. The Architects of the Flesh, as holders of most of the planet's chi sites, were wiped off the face of time and existence. The Jammers, faced with the horrific disaster they'd brought about, split into two factions. The original Jammers now seek to claim sufficient chi sites in the past to Set Right What Once Went Wrong, no matter how many innocents have to die in the process. The New Simian Empire, meanwhile, seeks the establishment of a new cyber-ape empire, whether in this era or the past.

In addition, the Chi Bomb's explosion has also triggered the creation of pop-up junctures, temporary portals leading to other time periods.

Feng Shui is especially known for being one of the first role-playing games to implement rules for taking out mooks as opposed to important villains, and it encourages both players and Game Master to play the various tropes, clichés and the melodrama of the action genre to the hilt. In fact, Feng Shui is a unapologetic celebration of action movie tropes; it named and codified as many tropes as the author could think of. It was in some ways a precursor to this website.