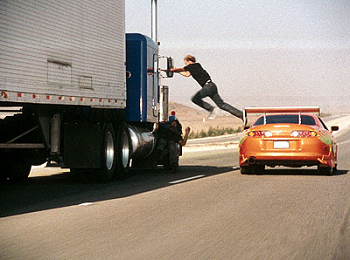 Boosting a car from a parking lot isn't that hard, when you get right down to it. You open the door, start the ignition, and as long as no one takes note of you, you can just drive off in your shiny new stolen wheels. If you've somehow managed to nab the keys to said car, then it's even easier. And as we all know, Rule of Drama dictates that easy things are boring.

You know what's cooler? Stealing a vehicle while someone's driving it, preferably at breakneck speed.

Depending on what kind of vehicle you're taking over, there are many ways you could pull off that stunt. A favorite of action movie heroes is to jump from one moving car to another (or from a motorcycle to a car, or a train to a car), taking down the driver (preferably by throwing him from the vehicle), and grabbing the wheel. For bonus points, let vehicles without drivers drift off, crash, and explode.

Don't let the limitations of your vehicle (or lack thereof) limit what you can steal. Jumping from one speedboat to another is child's play. Stealing a helicopter when you're on foot with nothing but a Grappling-Hook Pistol is better. Ramping a boat into the air and jumping from your flying boat into a helicopter? Awesome.

This trick has long been a staple of action movies of all types, and not just ones where gas-powered vehicles are common. Horse-jacking or carriage-jacking are fair game for action movie period pieces, and stealing a Phlebotinum-fueled Flying Car is remarkably similar to stealing a rolling one.

Compare Take the Wheel, Outside Ride and Hood Hopping, which frequently precede a High Speed Hijack, and Sky Heist, where an aircraft is used to steal something without landing. In space it may be accomplished by means of a Boarding Party that may use Boarding Pods. And please, don't try this at home.

After losing their car, Sanford & Deimos commandeer an AAHW truck.

After losing their car, Sanford & Deimos commandeer an AAHW truck.