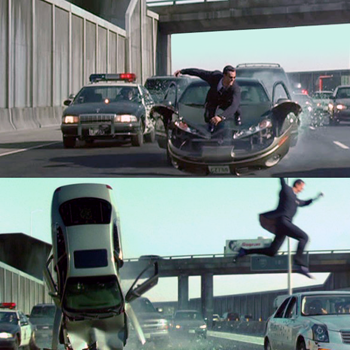 Desperate gridlocks when you're late for the office call for drastic measures.
Advertisement:

Car Chase meets Roof Hopping. The pursued character is getting away along a highway in a car or on a bike and the pursuer, lacking equivalent transportation, hops across multiple car hoods to close in on them. Explosions may be involved.

Sometimes the character slides over the hood for the extra cool factor.