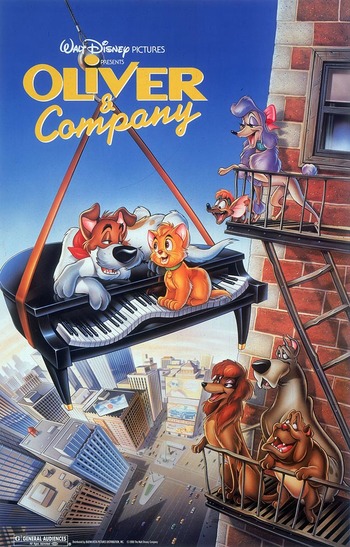 He gets his name about two-thirds through.
"Why should I worry?
Why should I care?
Yeah, I may not have a dime, but
I got street savoir-faire."
Advertisement:

Disney Animated Canon entry number 27 released in 1988, about talking animals, very loosely based on Charles Dickens' Oliver Twist. The setting is contemporary New York City, and Oliver is an unwanted ginger kitten who isn't even called Oliver yet. Fagin's gang is now made up of dogs, including a mongrel named Dodger (as in the Artful Dodger). Fagin himself is still human, and he's a good guy this time; in fact, he's just some poor schmoe trying to pay off Loan Shark Bill Sykes (based on Bill Sikes), the Big Bad; here a sinister gangster/Mafia type. The part of Mr. Brownlow is taken by Jenny, a 7-year-old girl who adopts Oliver.

The film is somewhat notable for some early use of CGI (mostly to create New York's traffic), and for being the last film of Disney's pre-Renaissance era — it came out just one year before The Little Mermaid. It staffed many new artists who would rise to popularity with Disney's future releases. It was one of the first projects that writer/director James Mangold (Walk the Line) worked on before going on to earn an Academy Award nomination for the film Logan. It's also important to note that the moderate success of this film brought back Disney's will to animate musicals, so you should thank it for songs like "Under The Sea", "Beauty and the Beast", "A Whole New World", "Can You Feel the Love Tonight?", and so on, and so forth, etc., ad nauseum.

When you see a subway train coming right at you, what other reaction would you have?

When you see a subway train coming right at you, what other reaction would you have?