A Cat in a Gang of Dogs 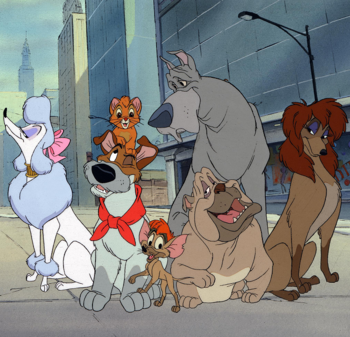 "...dogs and cats, living together; mass hysteria!"
You have your standard Heroic Pet Story with a pack of friendly dogs; you may have a street-smart mongrel, a friendly Great Dane, a tough Bulldog, a half-blind clumsy Sheepdog, a spoiled Poodle... and a cat?
Advertisement:

For some reason, in works of fiction featuring a cast of dogs, writers often include a cat as part of the team.

In those settings where Cats Are Mean, this is done to avoid the Unfortunate Implications that a race of pets is Always Chaotic Evil (and avoiding the risk of alienating cat-lovers among the viewing audience), turning said cat into the Token Enemy Minority. But in those settings where there's no Animal Jingoism and cats can be good or bad equally as often as the dogs, this is generally a way to show some "ethnic" variety and maintain a broader appeal for all animal lovers. As they often think they are superior, the cat is likely The Lancer of the team, representing the counterbalance to the canine leader.

If this was given Character Development, a cat will develop some puppy-like traits and act much closer to their dog friends. In Real Life, the puppy cat

is a term describing it.