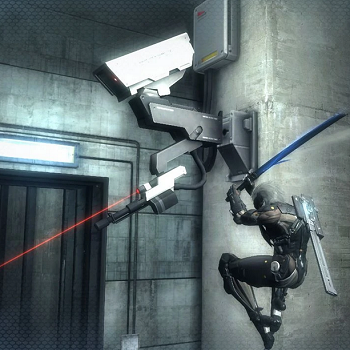 This trope is when a character shoots or otherwise destroys a security camera. This is done to prevent guards, the police, or homeowners either from watching their activities or from detecting them in the first place.

This is often done by shooting the camera, but other versions exist, like cutting a wire or painting over the lens.

A common piece of Fridge Logic that stems from this trope is the assumption that once a camera is out of commission, it can't raise suspicion. In reality, a guard is at least as likely to notice a blanked-out screen as a video of someone acting suspiciously. On the other hand, this can be justified if the goal is to prevent incriminating recording (though footage would still have been recorded up to the moment the camera was destroyed) or at least to prevent the cameras from getting real-time updates on the situation.

Not to Be Confused with Camera Abuse. If done to prevent detection in the first place, this usually involves an Insecurity Camera, as proper security setups should have multiple cameras covering one another's blind spots. Can overlap with Computer Equals Monitor, for when someone destroys the output end of a security system to try to disable it. Contrast with Camera Spoofing, when the security camera is manipulated such that a inconspicuous static image or looped recording of its view is shown to whoever is on the other end.