Western Animation / Lady and the Tramp 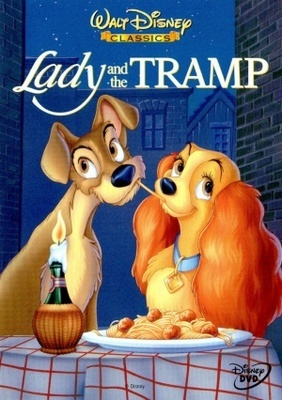 ♪ And they call it Bella Notte...♪
Advertisement:

Originally released in 1955, Lady and the Tramp is the 15th entry in the Disney Animated Canon, and the first that Disney theatrically distributed themselves. It tells the story of a loving couple and their family pet from the dog's point of view. Big changes are coming to Jim Dear and Darling's family, something that the eponymous Lady has trouble understanding. Meanwhile, Lady herself has caught the eye of the Tramp, a stray dog (and ladies' man) who prefers the uncertain freedom of the streets to life in a collar, which he views as slavery. He tries to convince Lady to live more recklessly, but she believes just as strongly in loyalty to her humans and her home. Will The Power of Love convince Tramp to see things her way?

The movie spawned a series of comics, starting with the newspaper strip Scamp: Son of Lady and the Tramp, Scamp also stars in a direct-to-video sequel to the movie, Lady and the Tramp II: Scamp's Adventure, which was released in 2001.

It is the first feature-length animated film created in a widescreen format, making it a landmark in animation history.

A Live-Action Adaptation by the same name was released on November 12, 2019 on Disney+.

She ain't afraid to get rough with a rat.

Example of:
Beware the Nice Ones

She ain't afraid to get rough with a rat.