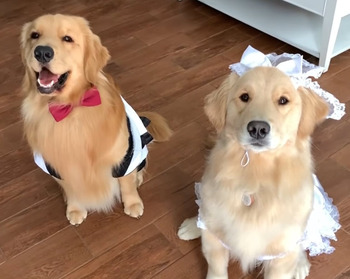 "Tucker, do you take Journ-journ to be your floofy-wedded wife, 'til treatos do you part?"
In fiction, sometimes animals are referred to as if they're married, even if their species is non-monogamous by nature note Birds such as swans, geese, eagles, doves, and pigeons, and canids such as foxes, grey foxes, coyotes, and wolves are naturally monogamous., because Most Writers Are Human. At times human characters refer to themselves as married for convenience's sake and other times the animals themselves refer to each other as married.
Advertisement:

No actual marriage has to even be shown. It can be an In Name Only title with no legal bearing (if the series even has laws). Animals will very often be considered "married" as soon as they become mates.

Marriage between animals is most prevalent in children's works and Beast Fables. Instead of being referred to as mates, animals will be referred to as "married". Often times this is shorthanded to by referring to them as "Mrs. [x]" and "Mr. [x]" (often using a Species Surname) in animal characters hailing from Anglophone countries, "Sra. [x]" and "Sr. [x]" (often with a Species Surname) in those hailing from Hispanohablante countries, or whatever their given country's language's equivalent is.

This trope can also explain the works with animal characters that have implications or explications of having out-of-wedlock births.

This trope applies to the Nearly Normal Animal, Speech-Impaired Animal, Talking Animal, and Partially Civilized Animal. It also applies to the somewhat anthropomorphic Civilized Animal. This applies to Funny Animal characters that are treated as the animals they are in the work's verse or are more Beast Fable in nature, but not to those treated as humans in-universe or those that have a Furry Lens on them. This doesn't apply to Beast Men, as they're usually treated on par with humans.

Animals that live and are treated like humans, such as World of Funny Animals types, don't apply to this trope, for that would be People Sit on Chairs.