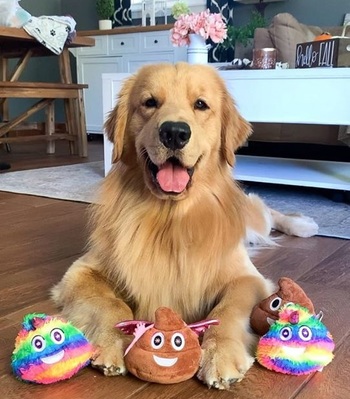 "Henlo, am Tucker, wanna be frens?"
Tucker Budzyn is a Golden Retriever who lives with his owner, Linda (real name being Courtney), and he features on the YouTube channel

of the same name. The videos feature Tucker performing food "reviews" and other ASMR Videos, alongside funny videos of Tucker and Linda "pranking" and "bantering" each other, as well as daily life vblogs.
Advertisement:

On August 2021, Tucker's son, Todd, was adopted by the Budzyns and started featuring on the videos.

His videos feature examples of: