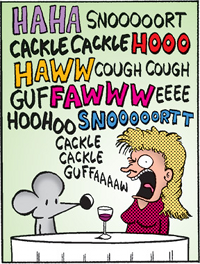 "Bad laughs: the great deal-breaker."
"I do realize that when I laugh, it sounds like a seal is being molested."
— Jimmy Carr, The Big Fat Quiz of the Year 2009
Advertisement:

Laughter, of course, is one of the best known and most treasured ways that human beings express happiness. In addition to laughing when they find something funny, people laugh when they find something joyous, or heartwarming, or even stimulating. In general, a person enjoys hearing another person laugh. Unless, of course, that other person has a laugh that, rather than sounding joyous, sounds painful or cringe-inducingly awful.

The Annoying Laugh usually comes in several specific flavors (the Asthma Attack bellow, the high Hyena-like cackle, the Snort-Snort-Snort, the Machine Gun Chuckle, and the Donkey-like Bray being the most common). In some cases, the Annoying Laugh is used in place of actually fleshing out a character, since the type of annoying laugh can lead the audience to assuming the character basically is just as annoying as his or her laugh happens to be. In some cases, a character will have an Annoying Laugh because the script calls for it, but sometimes its because the actor playing the role laughs like that for real.

The supertrope of the Noblewoman's Laugh. Almost always Played for Laughs. Compare Un Evil Laugh. Sometimes part of an Overly Long Gag. The Annoying Laugh is very common in animation and sitcoms. Subtrope of Signature Laugh.

Please don't use this trope to complain about laughs you don't like.

In-Universe or Word of God-backed Intended Audience Reaction examples only: