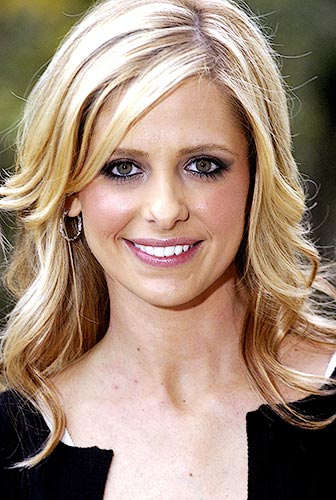 "Buffy's very similar to me to me when I was growing up. A child in an adult world, sort of trapped between the two. Does Buffy go to the prom or does she save the world from demons?"
Advertisement:

Sarah Michelle Prinze (neé Gellar, born April 14, 1977 in Long Island, New York) is a Daytime Emmy Award winning actress who is most famous for her role as the eponymous character in Buffy the Vampire Slayer. You may also know her as Daphne in Scooby-Doo (2002) and Scooby-Doo: Monsters Unleashed, as well as staring in classic horror movies such as The Grudge & The Grudge 2, I Know What You Did Last Summer, and Scream 2. Gellar has six Teen Choice Awards and a People's Choice Award under her belt.

She's been married to Freddie Prinze Jr. since 2002 and they have two children together.