"You're a sheep. All you ever do is what everyone else does, so you can say you did it first. And here I am scrambling for your approval when I'm way cooler than you are because I'm not a sheep. I do what I wanna do and I wear what I wanna wear, and you know what? I'll date whoever the hell I wanna date! No matter how lame he is."
Cordelia Chase 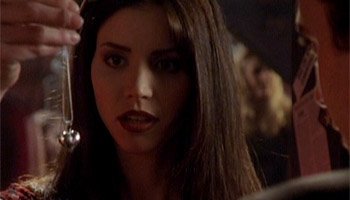 On Valentine's Day, Cordelia finds herself ostracized by her clique for going out with Xander. After sadly accepting a necklace from Xander, she breaks up with him. Xander is humiliated the next morning when everyone at Sunnydale High is laughing at him. He spots Amy Madison using magic to get out of homework and blackmails her into casting a love spell so he can break up with a lovelorn Cordelia.

The next morning, Xander swaggers confidently up to Cordelia, but finds her unaffected. Buffy consoles him on what happened with Cordelia, and suggests that they get together to "comfort each other". Xander cannot believe his luck, and the two then nearly kiss when interrupted by Amy. Xander realizes that Amy and Buffy are both acting the same way towards him. He runs home, only to find Willow hiding under his sheets wearing only a long shirt. She offers him her virginity, and he flees in terror.

The next day, all of the girls at Sunnydale High are pleased to see Xander in the hallways; the boys, less so. Xander blockades the door to the library, only to find Buffy, wearing only a trench-coat. When he refuses to undress her because she is under the influence, she becomes enraged. Amy walks in seeking Xander too, and both girls argue, thinking Xander is two-timing them both. Amy turns Buffy into a rat, sending her scurrying behind bookcases.

On his way out, Xander sees Harmony and other girls viciously attacking Cordelia for what she had done to Xander two nights earlier. He rescues her and takes her outside, only to find an axe-wielding Willow leading other Sunnydale females. Xander and Cordelia flee to Buffy's house, only to find Joyce (‼) pawing over him. Angelus arrives and attacks Xander, but he is saved by Drusila, who is also under the spell. The mob arrives and the two vampires leave. The mob breaks into the house with knives and sticks. Cornered in the basement, Xander reveals to Cordelia that he meant the spell for her (leaving out the part about it being a mode of revenge). She is touched.

Meanwhile, Giles had convinced Amy to reverse her spells. The Buffy-rat is switched back to human. The spell is lifted from the obsessed women in the Summers' basement. Thinking quickly, Cordy commends their "scavenger hunt."

The next morning, Willow's emotional history with Xander has left her furious, and she refuses to talk to him. Buffy comments that she was impressed by Xander's reaction to her seduction. Later, Cordelia finally renounces Harmony and her ilk, reconciles with Xander, and walks away arm-in-arm with him.