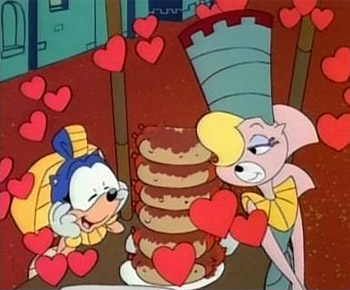 All of Sonic's Yu-Gi-Oh! cosplay and chili dog fantasies have finally come true!
"I ♥ _____"
Advertisement:

An exceedingly common love trope that stipulates the following:

Apparently, the heart (being the organ responsible for powering the circulation of blood around the body) is an extremely romantic thing. Hence, "hearts" are equated with positive emotions, such as love, kindness, and compassion. According to this logic, someone that lacks ability to sufficiently feel such emotions is "heartless," and someone that has recently experienced a romantic tragedy is "heart-broken."

When a Heart Symbol is used for this, it's traditionally pronounced "love," as in "I love New York" for "I ♥ NY," although recent convention has been to actually pronounce the symbol as "heart" — for example, the film I Heart Huckabees. This in turn has led to the Internet meme of typing "I less-than-three X," in reference to the mathematical meaning of "<3".

In Animation and Graphic Novels, a cloud of hearts drawn floating near a character's head sometimes indicates a character falling in love and/or lust. Eyes popping out in the shape of hearts, oversized heartbeats, and the like are all some of The Oldest Ones in the Book.

The reason for this goes back to ancient days when people could do little more than guess at why people had so many different weird bits inside them, let alone which ones did what. Different cultures decided on different organs as being the seat of emotions and/or intelligence; Some went with the intestines (such as the Hebrews of the Old Testament), some went with the kidneys, some went with the Heart, etc. The Ancient Greeks were among the ones who went with the heart, and such was the strength of their influence on western civilization that many of our idioms and figures of speech still reflect the notion of the Heart being the cognitive organ, even though we've known it to be untrue for centuries.

It's possibly a Discredited Trope, as subversions, deconstructions and parodies seem more common than playing it straight these days.

Note that Heart Symbol is for just the stylized symbol itself. A Projectile Kiss may involve this trope. It may also be used with Say It with Hearts to convey love, or at least liking.