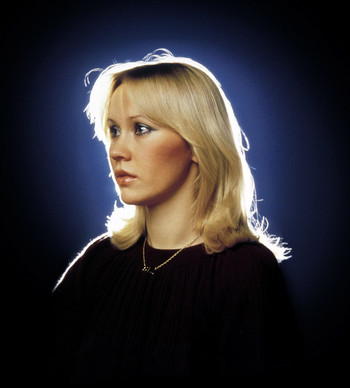 The Girl With Golden Hair.
Advertisement:

Agnetha Fältskog (pronounced a-nye-ta fehlt-skoog, born 5 April 1950) is a Swedish singer, songwriter, composer and sometime actress. She was born in Jönköping, Småland, Sweden, to Ingvar and Birgit. She grew up singing in various talent shows put on by her father and composed her first song, "Two Little Trolls", at the age of six. In 1960 she briefly joined a singing group, The Cambers, before breaking off to sing at Sweden's many folkparks and become involved with the dansband scene. She started singing for Bernt Enghardt's dansband in 1965, and while gigging at various venues, she recorded demos and wrote many songs. She sent some recording she made with Bernt Enghardt's band to Cupol Records, who only wanted to sign her as a vocalist without the band. She was signed to them in 1967.

Later that year, her first single, "Jag var så kär" ("I Was So In Love") was released and went straight to the stop of Svensktoppen. In 1968, her very first album was released, featuring the single "Försonade" ("Reconciled") which she performed at Sweden's Melodifestivalen (the Swedish Eurovision heats). Although she did not place, she enjoyed enduring popularity in her home country, occasionally making trips to Germany to record singles in German (something suggested to her by her then-boyfriend, Dieter Zimmerman).

In 1969, she broke off her engagement to Zimmerman and shortly afterwards met Björn Ulvaeus of the Hootenanny Singers on the set of a TV show. They got engaged in 1970 before marrying in 1971. Their combined level of fame resulted in a media circus surrounding their wedding. The band performing at the wedding was the Hep Stars, with Benny Andersson - Björn's writing partner and closest friend - on keys. At the time, Benny was engaged himself to Anni-Frid "Frida" Lyngstad. Agnetha and Frida contributed backing vocals to Benny and Björn's debut album, Lycka, something that inspired them to form as a quartet. They initially went by "Festfolk" (a Double Entendre meaning both "engaged couples" and "party people") performing as far away as Cyprus, however they decided to ditch the burlesque elements of their performance and go with a straight pop sound. After some Retool efforts, they started going by the name of ABBA in late 1973. It's commonly accepted that the first A represents Agnetha while the last A represents Frida.

And then, of course, well you know the rest. For a more comprehensive history of ABBA, see here. During this time, Agnetha did continue her solo career to fulfill her contractual obligations to Cupol - her solo albums Bästa (a Greatest Hits Album with a couple of new tracks), Elva kvinnor i ett hus and Tio år med Agnetha (another Greatest Hits Album with extra tracks) were released in 1973, 1975 and 1979 respectively.

In the 1980s, post-ABBA, Agnetha released three English-language albums (Wrap Your Arms Around Me in 1983, Eyes of a Woman in 1985 and I Stand Alone in 1987) as well as a Swedish-language Christmas album with her daughter Linda (Nu tändas tusen juleljus in 1981) and a Swedish-language children's album with her son Christian (Kom följ med i vår karusell in 1987). There was also the occasional non-album single released, such as her 1986 duet with Ola Håkansson, "The Way You Are" - a song used to promote the campaign for the city of Falun to be the host of the 1992 Winter Olympics. She went on a lengthy hiatus from music between 1989 and 2003 before releasing the covers album My Colouring Book in 2004 and the all-originals album A in 2013.

As an actress, she played Mary Magdalene (Maria Magdalena) during the Stockholm run of Jesus Christ Superstar in 1971 as well as Lisa is the 1983 Swedish film Raskenstam.

The tropes with golden hair: